The life journey & inner dialogue of a warrior goddess

A rush of inspiration ran through me early last week.  I had been trying to figure out the best crafty use for these empty wooden frames I acquired.  Every time I entered my room and saw them I would think, “I am not sure what, but I will do something real cool with you little buggers soon.”

As I was gearing up for Symbiosis Gathering, I was working a fair bit and my sleep patterns were oddly off, I went outside for a late night meditation.  Mid-meditation a mantra came to me:  Radiate Kindness and Genuine Love.  I repeated it over and over again cultivating this epically delicious feeling inside of me.

From that feeling stemmed a thought, “I want to share this feeling.”

Then I thought, “BINGO!!  I will paint the frames and make signs out of them that I can set up next to my person and I will do public meditations in high traffic areas at the festival and document what happens.”

And so it was…

While I was in Thailand I had done a few meditations in public and it felt incredibly invigorating to cultivate space within while so much happened around in the exterior world, so I was excited to see what might come of this inspiration of mine.

I envisioned my meditations having a ripple effect on the whole Symbiosis community.  I was day dreaming, while painting my signs, of opening my eyes after my 15 minute sits to encounter many beautiful souls that were drawn to the moment and compelled to sit with me.

I think at festivals, even ones that have a conscious worldly foundation, people can get lost in all the stimulation and available debauchery.    I wanted to be a source of grounding.  I wanted to be a beaming light

I have gone to a fair few festivals such as burning man, lightning in a bottle, and enchanted forest, but preparing for Symbiosis felt different in such a cool way.  It was the first festival I have gone into with such a proactive intention.  In the past I have attended these types of events for the yoga, music, dancing, people, and art; I was essentially there to indulge in all the epicness that was offered.  Obviously the enjoyment of those things are what the festivals are made for and there is nothing wrong with that, it was just different for me gearing up to attend with a mind space of offering and giving back something that isn’t material. 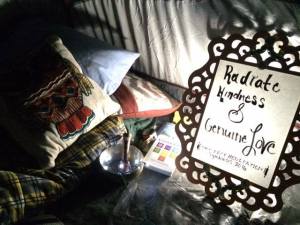 The day was in peak heat and I was lured into this small dome. Where it wasn’t high traffic by any means, but when I got inside there was a small group of people lounging.  As I set up my sign they asked what I was up to.  All 7 were so interested and stoked on it, they wound up joining me.

At first I was just going to hit my singing bowl and have it be a silent meditation, but after a few moments I felt compelled to share a few things I was feeling.  “Envision filling this whole dome with love, so much so that it radiates beyond itself.  So much so that it catches the attention of any person near or far.  They will be drawn to its infectious energy, and be filled with the love that we are emitting.”

The physical meditation became hard for me to hold nearing the end because people began hanging signs with power tools on the outside of the dome. Hah. I started to sweat, I became nervous that there was a talk or class that was to be held in the space because I heard people enquiring about what we were doing and how long was left.  I broke the meditation, what I thought was early and went to turn off my alarm ahead of time just as the last few seconds ticked down.  I was relieved that even though I cracked 4 seconds early, the group session still amounted to the full 15.

Post meditation everyone was so sweet and thankful.  I received a juicy loving embrace from each person and they encouraged me to keep spreading the conscious vibes.

The second sit I set out for was at the swimbiosis stage, a stage that rages hard hard all day occupying an easy several thousand people.

It was heaps hot and I sat right out in the sun holding an umbrella to shade me with one hand, and my other hand at heart center.

When I sat down and closed my eyes I had to smile to myself because as I was focusing on emitting the most conscious loving kind vibrations from my being all I was hearing from the many people around me were things like..

Now, most likely none of these comments were actually even directed towards me.  We are all familiar with the phrase selective hearing.  I think if my mindset were on a different level of any kind as I sat there my ears could have picked off a million other fragments from conversations that were happening around me.  But those are the things I heard, and it was absolutely fascinating to me.

After a period of time- what I feel was much beyond 15 minutes I came out of my meditation. When I went to turn my alarm off I saw that it had stopped after the first 20 seconds.  I have no clue how long I sat there, though I am curious.

When I opened my eyes sitting right in front of me was this awesome soul with love and truth tattooed on his forearms.  I hit my signing bowl and he opened his eyes.  His name was Jayshine, he told me that he was working his way through the crowd to find a space away from the crazy for some grounding, and then he saw me.

YES!! Right then and there I felt an overwhelming sense of mission accomplished!

My Third mediation I went back to swimbiosis area.  I sat pretty close to the dance floor, SUN:MONX was dj’ing. I had never heard them but I will tell you it was one of the most epic, light, lovely meditations I have had in a minute.  I am so affected by my sense of hearing, and their wave length kept me so steady in an excellent head space.  Delicious.

No one joined me for that meditation but I feel like just by being there my good vibes were absorbed by everyone around.

I set my speaker up for this sit and played a few of my favorite songs at  location called the hub.  It was a similar experience to the one before where I didn’t have people join me, but it for my own practice it was everything it needed to be and more.

I wound up wearing the sign around my neck like a big giant bling each day, all weekend.

What became most evident to me by day two was: You get what you give.  And I was giving out my best smile, eye contact, and warm hearted essence that I humanly could to every individual.  In turn the people around me were reciprocating, they were vocally thankful and expressing gratitude, and I saw more toothy smiles that I had in a long time.

What also became evident was I don’t NEED the sign to be all of those things and have people recognize and respond to my genuine nature.  Though it certainly helped.

That was my little self implemented meditation project.  I think in the future in order to draw bigger crowds for participation I probably would just need to sit in locations where people might already be on a similar wave length; like near the yoga tents nearing the end of classes (why didn’t I think of that until just now?) Party stages- maybe not trying to get in the zen wave at that moment. Haha.  I guess I was going for what I knew would be a challenge.  Also I could work on my signage, and maybe sit for a longer period of time?

Thanks for tuning in!! Feel free to like this puppy or leave comments/feedback.